The Bank Holiday weekend saw 24 classic boats assemble at beautiful Llyn Clywedog in West Wales for the 11th CVRDA National Rally. Clywedog Sailing Club is fairly difficult to get to over the mountains, but travellers were rewarded on arrival with a warm welcome, a campsite with fantastic views, the best sailing club cooking in Wales and an open bar. Perfect.

Saturday’s practice race was held in wild conditions, but despite this 17 boats made the start area. Several decided after one lap that enough was enough, but most carried on. A huge squall up the beat, however, saw many boats simply blown flat. The rescue crews did an amazing job towing boats home where necessary (Thank you!). Despite this, 4 boats made it to the finish, and amazingly, even though most of the boats were built over 40 years before, there was no serious damage.

Sunday dawned wet and windy – not ideal weather for vintage dinghies. However, only a couple of boats decided to sit out the racing. Boats out sailing ranged in size from 20’ long Flying 15’s and a 17’ Skua to a 12 foot long Firefly and a National 12. Classic Merlin Rockets (and a Vintage pre-amalgamation Rocket) were the best represented class, with 6 boats dating from just post war to 1971.

A Fireball lit up the race course between spectacular incidents, ranging from rounding marks in the wrong direction in front of the whole fleet to capsizes and the helm throwing himself overboard… congratulations to Roger Devereux on winning this year’s Wingnut Award for spectacularly daft behaviour!

In the racing, the Flying 15’s coped well with the conditions, though one pushed things rather too hard and managed to capsize. Amazingly, they managed to sail the water out and carry on racing. Also going well were Albacore 195, Finn 197, and Firefly 2324, all built by master boat builders Fairey Marine, over 50 years before. On handicap in the 3 races sailed, Finn and Firefly shared top honours.

Monday dawned early for the campers, with bright sunshine flooding the tents, rather than the previous day’s rain. Even better, the wind had dropped to a manageable amount. The whole fleet set out, and a crowded start line saw Flying 15 2127, Pegasus 199 and Merlin Rocket 2121 build a massive lead by the 2nd mark. However, as the race went on, the wind dropped, and chasing boats managed to close the gap on the stranded leading 3 just short of the finish line. Finn 424 managed to go from dead last to 3rd on the water.

After lunch, the final race started in almost still conditions, and this time it was the chance of the superbly sailed Finn 197 to build the huge lead. However, the fickle wind had one last trick up its sleeve as the final beat for the Finn turned into a reach for everyone else, and the Firefly was able to close up enough to take a somewhat lucky win on handicap.

It was fantastic to see so many old boats showing that they are not ready to be put out to pasture, being so well sailed by their loving owners. Thanks must go to the Mick the race officer and his team for putting on a great event on a weekend of weather extremes. 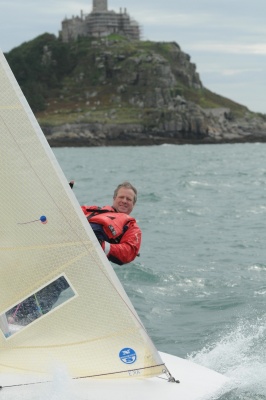 Fireball's return to Western Australia for 2012

The International Athlete is getting married !!!!!