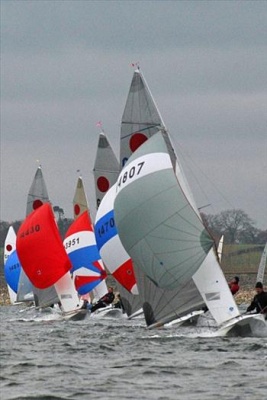 The inaugural Draycote Dash took place at Draycote Water Sailing Club over the weekend of 20-21st November. More than ninety boats competed in a race series comprising of 4 short races on trapezoidal courses on Saturday, followed by a longer race and a round-the-cans pursuit race on Sunday. Race Officer Chris Avery had planned for six thirty-minute races on Saturday, the weather, however, had other ideas. Fog and a lack of wind delayed launching and it was nearly twelve before racing started.

The fast boats (PY 972 and below) were first to go, followed by the medium fleet (973-1070) three minutes later. The medium fleet were a little too keen and were called back. The black flag appeared for the second attempt. This time the start was clean and the slower boats (1071+) followed shortly after. Simon Childs of Hayling Island in a Phantom took the first race followed by Jeremy Atkins in a Solo and the RS400 of Mark Reddington & Colin Staite from Bartley.

Races two and three started cleanly and by lunchtime Childs had two firsts and a third and was comfortably in the lead, with Atkins winning the second race and the Blaze of Nick Miller (Morecambe & Heysham) taking two seconds. The start of race four was delayed due to a wind shift and with fog threatening, the fleet started cleanly. This time, the D-One of Tim Garvin of Queen Mary was first, with Childs second. Fog and fading light curtailed racing and at the end of Day one Childs had a comfortable lead with seven points from the Alto of Ollie Love and Gavin Lincoln (Pitsford) on 20 points.

Racing on Sunday was delayed until 11 to allow the wind to build and race five started cleanly with a Northerly F3 catching a few sleepy helms out. The race was won by former European and World Fireball champion Andy Smith, sailing with Tim Needham in a 505. Childs extended his lead by taking second.

Going into the afternoon’s pursuit race, the series was Childs’ to lose on six points from Love and Lincoln on 20. With three boats on 21 points and Martyn Lewis and Richard Byne hovering on 31, there was no room for error as the final race was for double points and couldn’t be discarded.

Daniel Lewis (10) in an RS Tera and sailing in his first major regatta started the final race and sailed well to hold onto the lead for well over an hour before the Solo of Atkins passed him. Childs was creeping up and eventually passed Atkins and built a solid lead until the Fireball of Lewis Senior and Byne came into the picture. The final reach was an exciting affair, with the Fireball flying its spinnaker, it was catching the Phantom, but wasn’t quite able to make the mark. The spinnaker was dropped and the Phantom rounded the mark in the lead with less than five minutes to go. A tactical beat followed with Childs covering Lewis all the way and with a minute to go there was only a few yards in it. Childs covered each move of Lewis and at the gun it was Childs from Lewis by a boat length.

Childs was crowned a worthy winner with second overall going to Nick Miller in a Blaze and Simon Hawkes of Wimbleball, third in a Phantom.

First Youth and Junior boat was Rob and Emma Loveridge in a 29er in 20th; an impressive performance from two young sailors who have just moved up from the Feva. Local Fireballers Lewis and Byne were the first double-hander, and with Prizes sponsored by Hambleside Danelaw Ltd, OnBoard Surf & Sail, and Lanes Restaurant, the race committee was able to extend some pre-Christmas cheer further down the fleet with spot prizes for all those whose score ended in a ‘4’ or a ‘7’.

Representing the race committee, Richard Le Mare commented “This has been a great weekends’ racing and it was nice to see so many visiting boats here. We hope to make this an annual event and would like to see even more boats next year!”

For more pictures of the event see www.malcolmlewinphotography.co.uk and also Flickr.