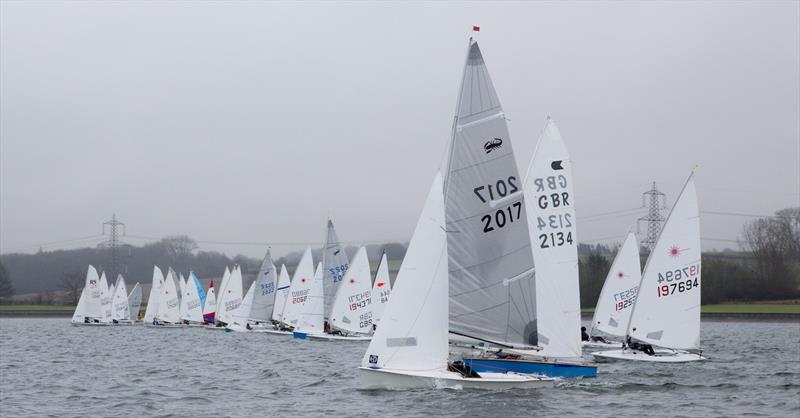 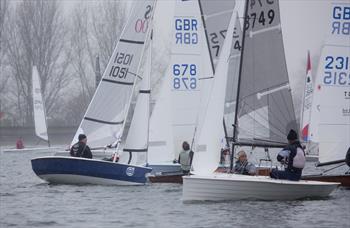 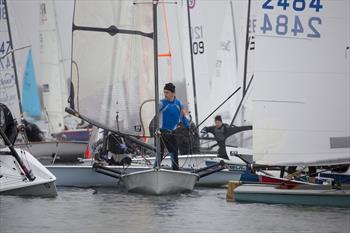 Nick Craig and Alan Roberts sailed their Merlin Rocket to victory over a 140-boat fleet at a light-airs Oxford Blue on Farmoor Reservoir last Saturday. Along with their win at the Datchet Flyer last month, this moves the multiple Endeavour Trophy champions into a commanding lead after four of the eight events in the GJW Direct Sailjuice Winter Series.

The first race - set on a trapezoid course - started in about 5 knots of wind. However, by the half way mark, the breeze had dropped to almost zero, before returning with a 90-degree shift which turned the reach past the Farmoor clubhouse into a beat. The Solos did well in this race, with last year's Series winner Michael Sims winning ahead of the Scorpion of Peter Gray and Rachael Rhodes, and Jamie Lea's Solo in 3rd.

Race officer Richard Hall set up a new course for the fresh breeze that arrived for the second race. The faster boats capitalised on the slightly stronger breeze, with the Merlin of Ben Hollis and Sean Anderson taking the handicap win ahead of reigning Fireball World Champions Christian Birrell and Sam Brearey. Craig and Roberts sailed their Merlin to 3rd in this race.

After a drizzly start to the day, the clouds started to break for a glimpse of blue sky, and the ever-improving Craigs and Roberts finished off with a race win ahead of 2nd placed RS200, sailed by Chris Catt and Catherine Martin. It was a handicap dead heat for 3rd, with 3.5 points going to Dan Holman, former Laser National Champion sailing his own boat design, the new Devoti D-Zero, and 3.5 points to last year's Oxford Blue winner Mike Lyons in a Halo.

Discarding a 9th in the first race and counting a 3,1, Craig and Roberts won the Oxford Blue with 4 points, half the number of the runner-up, the Scorpion of Gray and Rhodes. Holman's D-Zero was 3rd overall. Nine different classes finished in the top 10, with Birrell and Brearey the leading trapeze boat in 9th. It was a good turnout for the RS Aero singlehanders, with this event counting as part of the RS Sailing / Magic Marine RS Aero Winter Championship. Pete Barton was first of the Aeros, in 17th overall.

SailRacer was running GPS tracking at this event, and fastest boat on the water was the 49er of Graeme Willcox and Andrew Tarboton which finished 15th overall. Fastest boat on corrected time under the Great Lakes numbers used at the Oxford Blue, was Archie Hainsworth's RS Aero 5. Although he finished 91st overall on handicap, his speed through the water was highest relative to the class handicap number. The GPS data proved invaluable in answering lap counting queries; with 140 boats on such a tight course and the fastest boats almost two times as fast as the slowest, keeping count can be quite a challenge for the scorers. To replay the GPS tracking action, go here.

Jane and Nick Scutt, sailing an Enterprise, win some new gear from Gul, who sponsor a spot prize for the boat in 47th place as a celebration of their 47 years of providing 'innovative solutions to keeping you warm'.

Competitors praised the smooth running of the event but perhaps an earlier call could have been made for a provisional Sunday morning results posting rather than the race team pressuring themselves to get the scores right-first-time. Feedback welcome to [email protected]

Time lapse of the busy shoreline at the Oxford Blue, taken by SailRacer's Brenda Hoult

The next event in the GJW Direct Sailjuice Winter Series is just a few days away, when the Bloody Mary takes place this Saturday at Queen Mary Sailing Club to the west of London. Events in the Series, such as this weekend's Oxford Blue, have been booked out this winter, so to guarantee your spot (and save some money on the entry fee), get your online entry in before midnight on 7th January 2015. Enter at www.SailJuiceSeries.com

Results after four events can be found here.

Prizes for competitors, classes and spectators

Thanks to generous support from Series sponsors, we have some great prizes for competitors, and also for spectators and photographers. More details to follow in the coming weeks...

Enter the Series at www.SailJuiceSeries.com

The website will tell you more about the events in the Series, more about the Great Lakes handicapping process, and we'll keep you updated on everything else you need to know.

First of the Year Race at Notts County SC

Notice of Race released for 2015 Worlds

Allen to sponsor the Inland Championships at Chew