15 optimistic boats convened at Staunton Harold sailing club over the weekend – 10 sprint races were on offer, in the end 5 ambling races were achieved. The 7 home boats were supported by 8 travellers – some from a long way south, though many were deterred by the forecast.

Saturday saw the fleet rigging next to a mirror like reservoir. Some 30 minutes before the first start a gentle breeze developed, and racing was clearly possible. We saw a mix of courses – all simple (luckily for the visitors), and all short to fit the target time length of 25 minutes for the first boat.

The fleet learnt in race 1 that light breeze on an inland lake can be variable. There were many place changes throughout the race with Lucy Boreham and Richard Anderton coming out on top. Race 2 followed a similar theme, with Alex Taylor and Geoff Edwards leading the way only to be swallowed up by the fleet after being caught the wrong side of the beat.

Race 3 saw Dave Wade and Tim Saunders led for most of the race, but with Lucy and Richard closing fast, the OOD decided to extend the race by an extra lap. Lucy finally overhauled Dave on the final run.

Race 4 saw the Willcocks brothers find form  - having threatened it all day – and they led the race from start to finish. Kevin Hope and Russell Thorne had their best race of the weekend, fighting all the way around, and holding 2nd.

After a short break for some excellent high teas for refreshment, the decision was taken to sail a further race as Sunday’s forecast looked poor. Again the Willcocks led from start to finish, with the home boat of Andy and Lesley Foskett pushing them hard all the way. Though the breeze had held for the beat, the wind left abruptly as the fleet turned onto the run. Rick Cornes, sailing with James Goodfellow spotted a zephyr away by the bar, and taking full advantage, managed their best place of the day – 6th (I am reliably told that they had spotted the breeze, and were not in fact about to throw in the towel!)

After the legendary Saturday night dinner this year with a Mexican theme and hospitality the fleet reconvened for a spot of sun bathing on Sunday before heading home.

For the 2015 Season the Staunton Harold Open will be moving back to its more familiar role of season opener on the 28th and 29th March. 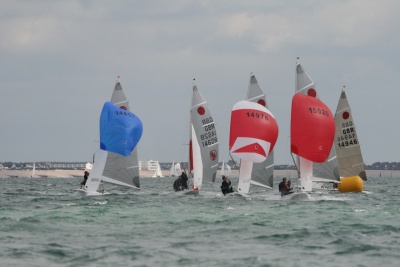